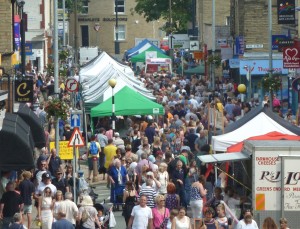 Waverley has been appointed to support the promotion of major events which are held in our home town.

We’ll work with the Brighouse Business Initiative (BBI) which runs a series of special weekends that take over the town centre bringing in tens of thousands of visitors and which are estimated to boost the economy of the area by two million pounds a year.

The events include a 1940s Weekend, Victorian Christmas Market and this weekend’s Summer Festival, the first event which Waverley has been backing by providing media relations support, producing creative and engaging social media and e-mail communications and a series of graphics and videos.

Director Stephen Naylor, who lives in Brighouse and has been a long-time supporter of the work of the BBI, which is made up of shop owners, businesses and key figures from the town, has worked with the group on the strategy for promoting the event.

“Brighouse has been put on the map in recent years through the amazing work of the BBI so I am proud to be supporting their efforts to bring more people and more money into the town, boosting the economy which helps all businesses, shops and residents across the area.

“The team involved have already been hugely successful at promoting the events on a local, regional and national level and we look forward to working with them to build on that for the future to spread the word about Brighouse and its ground-breaking events even further.”

“The BBI is made up of committed and pioneering individuals who give their time and effort to make Brighouse a better place for everyone. Having Stephen and Waverley on board will support our attempts to make each and every event we hold bigger and better. We look forward to an exciting partnership.”